After 24 years of teaching in a variety of venues (see “selected curriculum vitae”-yoga teaching) I no longer offer weekly classes. Occasionally I substitute for my teacher at Yoga One in Santa Rosa and will post these dates here. I am still available for private yoga consultations. If you currently practice or practiced in the past, but now have injuries or conditions that do not allow you to continue as before, this is an ideal way to learn modifications (both physical and attitudinal!) to stay safe, prevent reinjury, and support your healing. Contact me at (707) 829-7596, or [email protected]. 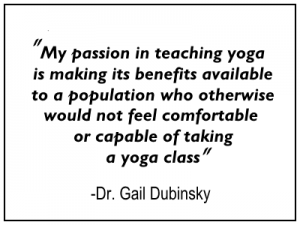 With these dynamic and unique DVDs and tapes, the expertise of a soft tissue orthopedic physician and experienced yoga instructor makes the healing power of yoga easily accessible to you. Our focus is to help prevent injuries and promote healing, while enhancing self care and optimum health.

You can purchase the DVD's here »

The destructive forces of overuse and postural strain cause a cascade of insults: inflammation swelling and irritation muscle tension constricted blood circulation fibrosis(scarring). Injured nerves become hypersensitive and irritable, with drastically lowered "pain threshholds". These maladaptive changes occur not just at the original injury ( for example the wrist in carpal tunnel syndrome), but can extend throughout the neural networks and connections in the spinal cord all the way to the brain. It is as if your body becomes "allergic" to the injurious activities: typing, mousing, repetitive manipulation or gripping, bending your neck down, reaching your arms out.This is why you are unable to tolerate normal amounts of normal activities such as writing a short note, washing dishes, opening a jar. To state it simply, R.S.I. causes damage to both structure and function.
Our symptoms are a strong alarm system for us to pay attention. It is critical to "stop, look and listen" to the danger signs of imbalance in the body-mind, and make changes before tissue damage becomes permanent and irreversible. The constant low grade "fight or flight" response to chronic pain and stress is a key obstacle to healing, because it causes and perpetuates muscle tension, constricted blood circulation, and shallow chest breathing, all of which deprive our tissues of the oxygen and nutrients they need for optimum health and healing. The good news is that we can reprogram our nervous system by practicing yoga on a regular basis, integrating body, mind and breath My RSI? Rx:Yoga! DVD program provides a special blend of breath awareness, modified postures to safely stretch and strengthen the entire body, and relaxation. To heal from repetitive stress injuries we need to look beyond the upper extremities and consider our connection to the earth and our relationship with gravity, cultivate soft steady abdominal (diaphragmatic) breathing, and develop core strength and stability to support and nourish the movement of our arms, legs, and spine, so we can let go of unhealthy muscle tension patterns, especially around the shoulders. Most of all, we need to relax deeply!